Microsoft and Apple Battle It Out. The Victim: My iPhone Battery

Mostly writing this up so that I'll remember how to fix it the next time it happens. Because, we both know, it will happen again.

I've been traveling a lot lately. Hawaii (vacation), home for a week, Austin (work), home for 3 days, San Francisco (work). So, I relied pretty heavily on my iPhone while I was out and about (checking email, keeping in touch, getting un-lost, etc.)

When out in San Francisco, I wasn't completely surprised when I got towards the end of the work day and noticed that my battery was in the red. I was caught off guard, but I figured "well, I must have crushed it today using the cell signal and GPS and all that." It died just after helping direct me to the local train station to catch the train to the Giants' game.

I plugged the phone in when I got back to the hotel, let it charge up overnight, and figured all would be well. A couple of hours later, my phone was down to 20% battery. And it was ridiculously hot.

I twiddled every setting I could find, turning off GPS, wifi, bluetooth, pretty much anything on the phone I could find. I killed every app. I restarted the phone. Nothing helped: my iPhone was losing its battery at about 1% a minute, meaning it would maybe last 2 hours. If I was lucky.

That was not going to be a fun way to deal with my travel day home.

I bought a handful of the "System Status" apps, hoping one would show me some process was stuck running. No such luck.

Finally, I stumbled on a link from a site I should have searched right away, Ars Technica. A couple of mentions of "Exchange going rogue."

Huh. I have Exchange. And, when I'm away from work, I end up in a weird state of using a bunch of different clients (my iPhone, iPad, the web interface, and—if I'm lucky—Entourage over VPN). Maybe something had gone wonky.

Minutes later, the phone was cool. My batter was staying strong. Sitting in the airport bar, I kept checking my battery, waiting for it to start dying. It hung tough at 25%. 6 hours later, upon arriving in Boston, it was still alive and kicking.

I should have know. When in doubt, always assume that the battle between Microsoft and Apple will be fraught with danger and innocent victims. 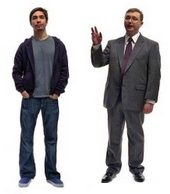 In iOS 6, I this battle extends to Apple and Google. Keep your charger handy.