The Amazing Serendipity of the Interwebs

I think, by far, my favorite thing about the interwebs is the ability to randomly stumble across an incredible story you didn't even know you were interested in. Today, while just doing my normal web reading—hitting a handful of pages, RSS feeds, Twitter, etc.—I stumble across someone mentioning the John 3:16 guy.

You know, this guy: 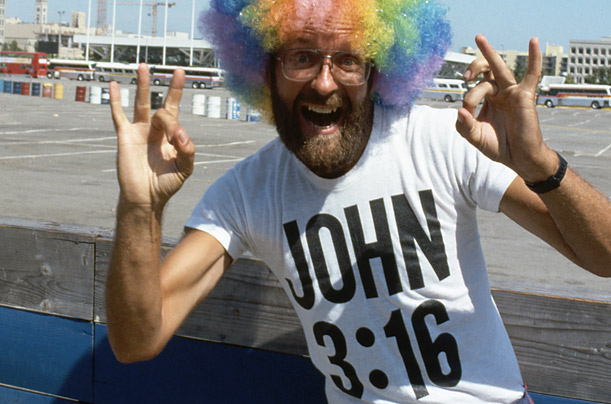 He's the guy who any sports-loving kid who grew up in the early 80s knows as the random rainbow wig dude who showed up every major sporting event and managed to get on TV. I'm guessing, like me, pretty much everyone assumed he was a well-intentioned goofball, just trying to get on TV.

I think we all just assumed he was a precursor to the modern day Jumbotron morons who get wear stupid outfits, do stupid dances, or hold up stupid signs, all in the name of getting on the in-arena Jumbotron (not even getting on real TV).

Except, turns out, he was a grade-A certifiable nutjob. And that's the amazingness of the interwebs. You can start your day reading about technology, sports, the weather, whatever, and end up seeing the John 3:16 guy, finding him on Wikipedia, reading some of the articles about him, and then adding the documentary about him to your Netflix queue. Learning about how he went from wearing a rainbow wig to attempting to buy a gun to shoot then candidate Bill Clinton.

So yeah, he's not just a cuddly crazy guy, he's a legit crazy guy. It's worth the read. A guy who, in a different era, would have been likely exiled to the dustbin of history, only remembered in microfiche, has his story told in a documentary, written into Wikipedia, and available to everyone at the end of a hyperlink or search query.