For Christmas, I'd been saving up some money and splurged on a new TV. My previous TV was an 8 year old read projected HDTV. It still worked great (and has since become the bedroom TV), but had problems with glare -- it was unwatchable during sunny afternoons (which ruined many an afternoon of college football). It was also enormous.

My new TV is the same size, but it's a nice flat, LED LCD TV. It'll use less power, it's small and is nicely mounted on the wall rather than taking up half of the living room, and does not have the glare problems the previous TV did. Oh, and it does the fun modern stuff like use HDMI and stream Pandora and all that jazz.

So, for a little bit of money, I was able to upgrade my TV, regain a bunch of space in my living room, clean up my entertainment center from 5 or 6 sets of component and optical cables, to a nice and tidy few feet of real estate, less cables, and a very different way of watching TV. 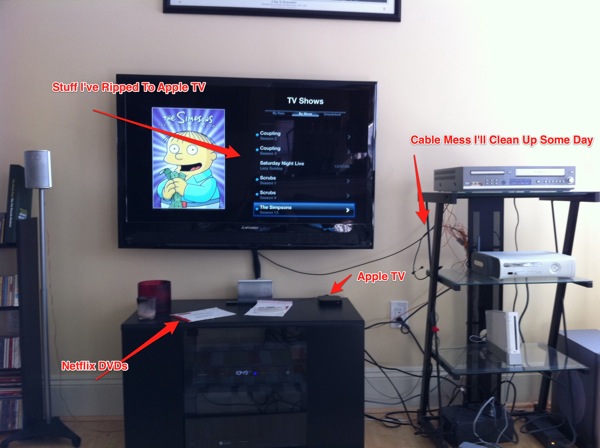 Let's set aside the easy stuff. Hooked up via component cables to my TV are the Xbox 360 and Wii. My Xbox 360 is an old model that doesn't support HDMI (which would have reduce yet another set of cables). The Xbox 360 used to be my streaming Netflix player and DVD player, which for any of you who have one, know that you get great picture and sound, balanced with a ridiculously loud fan noise.

Next up is the new Blu-ray player (which I got cheap with my TV). As someone who just didn't think it mattered enough for me to go to Blu-ray, I was mostly wrong. It's a remarkably better picture than DVD, but I'm not sure, in the long run, that it matters ...

... because of the interwebs and cable.

The other two items hooked into my TV are the Comcast HD DVR (HDMI) and the nice, new Apple TV (a Christmas gift from my wonderful girlfriend, also hooked up via HDMI).

The DVR is pretty self-explanatory. We pay too much for cable, but in return, we have a ton of HD programming. It's basically the live sports, network TV, and occasional cable movie player. Live, we really only watch sports. Celtics/Sox/Pats -- stuff you can't watch streaming (at least not legally, or in good quality). Recorded, we watch a bunch of shows (How I Met Your Mother, Parks & Recreation, Community, etc). And, occasionally, we record a movie off of HBO or watch one on On Demand.

The Apple TV is basically the streaming Netflix player. It's so tiny, and so quiet, and has a much easier to navigate Netflix experience than the Xbox. At this point, I think 90% of our Netflix movies are TV or movies we stream, rather than the physical DVDs (which let me downgrade to the 2-out plan, upgrade to Blu-ray, and reduce our overall bill).

But, the other thing the Apple TV lets me do is take advantage of all of the DVDs I've amassed over the 12 years or so that I've had a device that would play DVDs. I've got a full bookshelf of TV shows and movies that, by and large, site unwatched unless we get the urge to run through a series of Veronica Mars or Buffy. The real reason that we don't watch move of them is purely that it's a pain in the ass. You've got to go grab the DVD (and if it's a TV season, all 6 of them), throw them in the DVD player, sit through the menus, watch a few episodes, switch discs, sit through more ads and menus, etc. 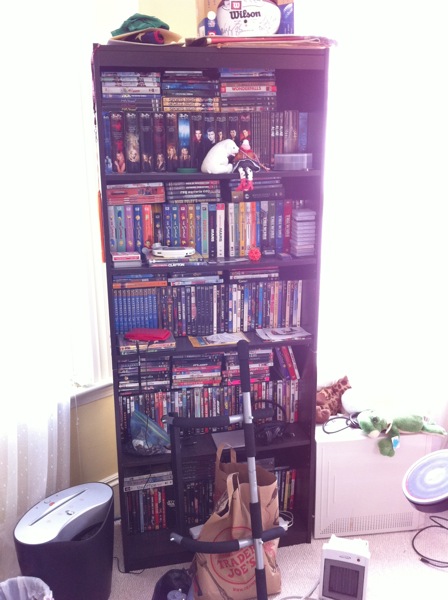 The Apple TV obviates that. It's not perfect, but with a spare computer, and a bit of time, you can make your own On Demand service. I've slowly been ripping TV shows and movies from my collection, throwing them onto some storage, and then using the Apple TV to stream them. Want to watch a particular episode of The Simpsons? Just turn on the Apple TV (which takes zero time), click it, and seconds later you're watching it.

If you're a media-holic like I am, it's pretty close to life-changing. When Netflix movies show up now (on DVD), I'm more likely to throw it in the computer, rip it, and then watch it on the Apple TV. Why? One, I can get that done while I'm watching a bit of TV, or eating dinner. When it's done ripping, I don't have to sit through any of the stupid ads or menus. I can just watch the movie. And, if I get tired, I just pause it, go to bed, and can pick it up in the same exact spot tomorrow. (Better yet, if I grab another $100 Apple TV, I can pick up streaming it in the bedroom.)

All the pluses, the sunshine, puppy dogs, and happiness in mind, the ripping process isn't easy. And it's time-consuming. And, depending on your view of things, not strictly legal. (In my mind, this is pretty much fair-use. I either own or rent the movie. If I own it, I can do what I please. If I rent it, I don't keep it. I watch it and delete it.)

Someone smart will combine Handbrake and MetaX or Subler into a nice app that rips, tags, and sticks your content right into iTunes. Today, it's pretty ugly, especially for TV shows.

But, if you've got that spare computer and some hard disk space, it's worth it. You just do it as a background process, throwing a DVD (or ripping a few to your drive), compressing them, and sticking them into iTunes. You can watch them on your TV, sync them to your iPad/iPhone, and slowly work your way towards cutting the cord with the cable company.

I've reached the point where, I think, if NESN or Comcast SportsNet were available outside of the cable company, I could cut the cord. ESPN streams over the Xbox (though not everything); most network shows are on Netflix or via the iTunes Store; almost all movies are covered via Netflix, the iTunes Store, or VUDU (the HD streaming service that syncs right to my TV and looks damn good).

If Hulu Plus were to come to Apple TV (or do AirPlay via the iPad), I could replace the $100+ cable bill with $25-30 of Hulu/Netflix/occasional iTunes purchases and watch everything I watch today. That's probably where we're headed, and the media companies are going to have to do it right, or they'll lose like the record companies did.

In any event, I'm pretty happy with the way things ended up, and can't recommend the Apple TV enough, even if you just want a small, quiet, streaming Netflix player.