How I Get Stuff Done

I've been meaning for a while to sort of document how I get stuff done at work. It was just over a year ago that I bought my MacBook Pro. Within a week or so, I started using it at work. Probably within the first month, I'd completely moved to my MacBook as my sole work machine. After a year, and particularly since the upgrade to Leopard, I've kind of worked out how I get stuff done.

Let's start with my environment. 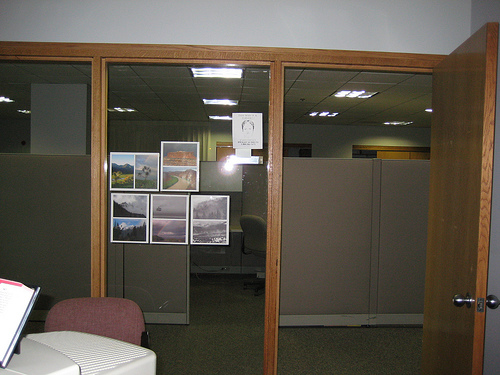 The front wall of my office with pictures taken by a former co-worker. And, of course, the famous "Dwight" flasher flyer from "The Office" 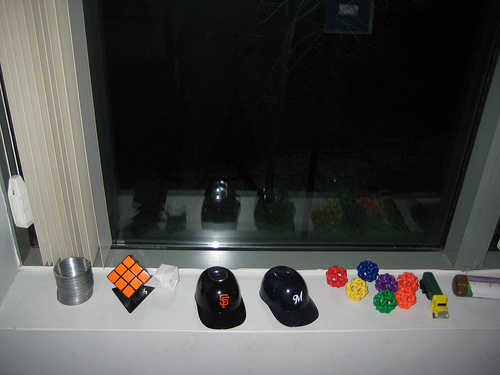 The shelf behind me containing random stuff I've gotten from eating kid's meals and ice cream sundaes. And some Yankee Swap gifts. Oh, and I have some windows. That makes my life nicer. 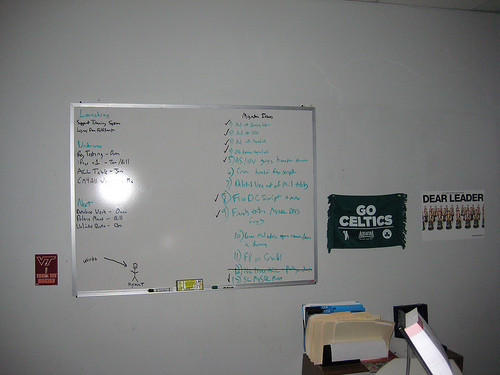 My white board and busted ass bookshelf. And my cool VT light switch cover from Matt, and some random stuff I've collected and hung up. 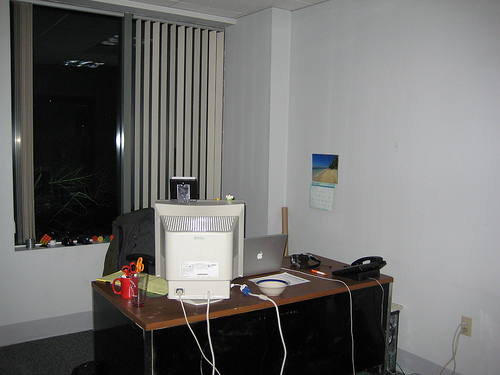 The view of where I sit. I used to use that big ass monitor to do a dual-monitor display, but since I've been moving around so much each day, now it's just there to keep people from having a good look at me. 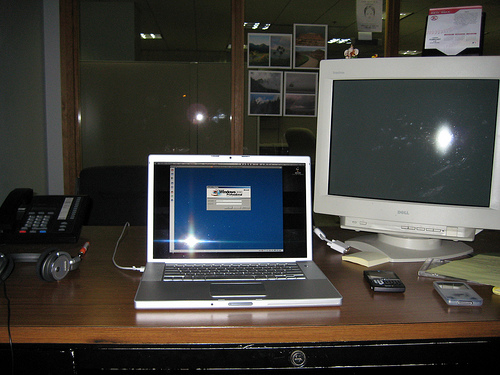 Finally, the MacBook Pro, my Motorola Q, my 30GB 5G IPod, my noise canceling head phones, and my phone that I don't ever answer or use. And yeah, that's Win2k running in Parallels. More on that in a bit.

So that's where I do my work.

My Mac is setup in a very particular way. The upgrade to Leopard with Spaces has made my life considerably easier. It's probably easiest to roll through how my Spaces are setup.

Space 1
This is where I use my browser, which is currently Firefox 3 Beta 3, and sometimes Safari 3.

Space 2
Here's where my Terminal lives, which is just the default Leopard terminal. Tabbed Terminals make me happy, particularly once I made the default tab switching hot keys to be Command+Left and Command+Right.

It's all command line and vim and mysql. Good times.

Space 3
Space 3 is where iCal and Mail live. Mail is just downloading my mail from Gmail. iCal is doing some cool stuff. I have most of my life in Google Calendar. iCal subscribes to my calendar feeds from GCal (including my work Outlook calendar--more on that in a second).

With all of my stuff in iCal, I then use the Missing Sync for Windows Mobile to sync my calendars to the previously mentioned Motorola Q (which also connects to my work Exchange server, so it's almost as a good as a Blackberry).

Space 4
It's the Windows space! I've got Win2k (don't ask, I had a license lying around) running in Parallels, in Full Screen mode. Parallels runs pretty much just so I can run Outlook (for work email and calendaring) and so I can occasionally test stuff in IE6.

My Outlook runs a plugin called SyncMyCal to sync my Outlook calendar off to Google Calendar (which then gets sync'd down to iCal, as previously described).

Other software that occasionally comes in handy:

That's how I get my work done. Anything else I should be using?