I got a nice trackback from the arc of time blog on my earlier post about creating a crappy little Greasemonkey script to let me quickly add Evite events into my Google Calendar. What that reminded me of was the fact that the script didn't work for events that didn't have an end time (and also got messed up with the time change).

Well, I fixed it. And now you can download the new version of the script that will let you, at least as far as far as I've tested, add any Evite directly into your Google Calendar. If there's an end time, it'll be set. If there's not, your start and end time will be the same, but you can quickly tweak that.

It all seems to work.

To use it, I'm assuming you have Greasemonkey. If not, go get it.

Then, install this user script: Evite to Google Calendar

That's it. Go to any open Evite. You'll see a column on the left that looks like the image below. 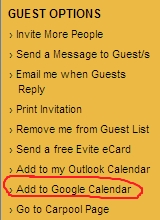 Note the link circled in red. That's what the script adds. Click that. You'll be whisked away to Google Calendar where you can quickly add the event and be done with Evite.

Again, I think it works. It at least works on what I've tested it on. Give it a shot. Let me know. If you like it, link to my blog so I can be the coolest.