The Funniest Bit from The Colbert Report

I TiVo The Colbert Report every day, generally not watching them until the weekend. The show is quite funny. Yeah, it's a one note gag (making fun of Bill O'Reilly), but it's a funny gag nonetheless. Almost without fail, the best moment of the show is "The Word" -- The Colbert Report parody of O'Reilly's "Talking Points Memo."

Last weekend, I was chugging through episodes when I watched the episode from December 7th. Colbert was talking about the Hugo Chavez offer of cheap heating oil to a handful of US cities (Boston, New York). Colbert's O'Reilly-like take was that the cities should tell Chavez to screw.

Honestly, words can't do the bit justice. So, I've encoded a video of it. And now that YouTube is huge, I've replaced my video with a YouTube link.
Watch "The Word" from the 12/7 episode of The Colbert Report. 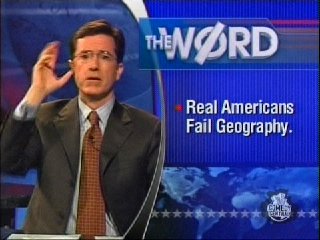